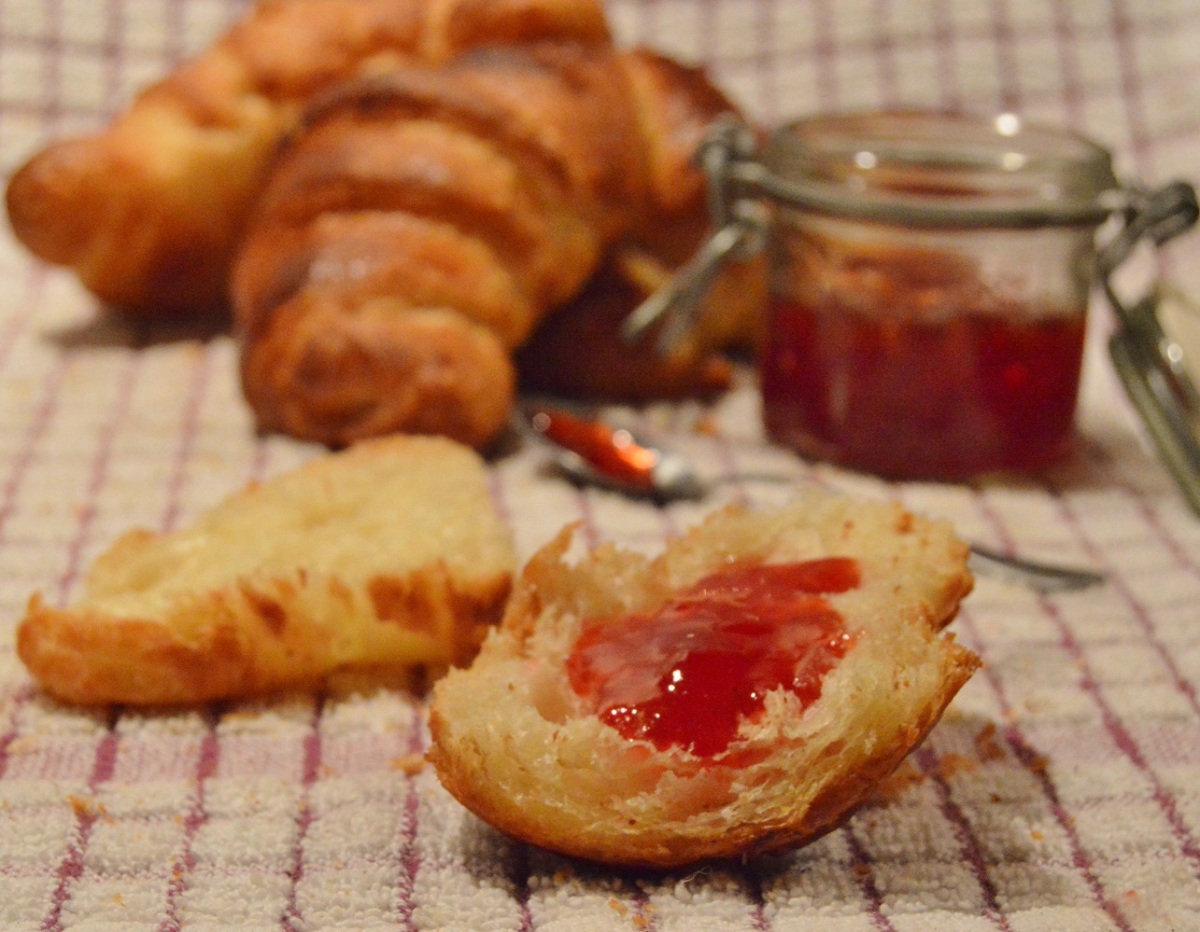 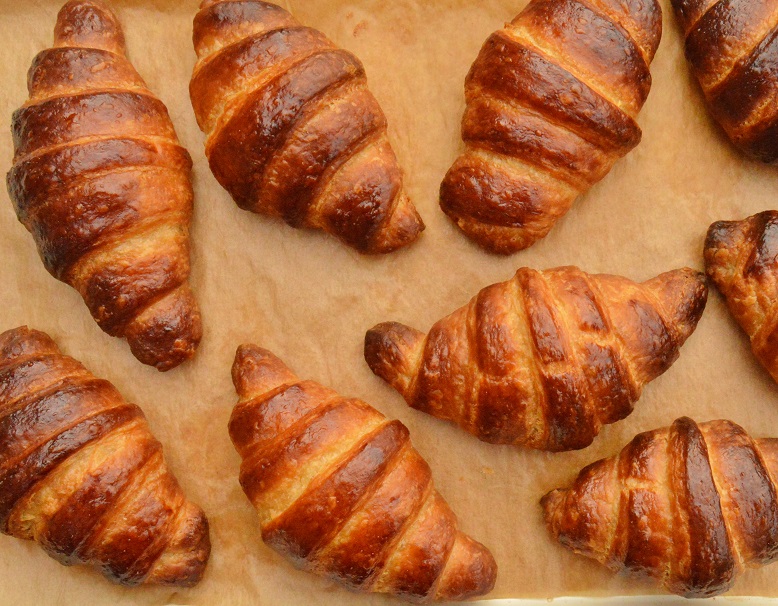 A batch of traditionally made croissants can take the best part of a weekend with all the resting and chilling in between the turns and at other stages.

Don’t get me wrong, making croissants this way is one of the top baking pleasures for me, but there are certainly times when effective shortcuts are called for. And this shortcut is certainly effective in that it gives excellent results and is easier to achieve than traditional croissants.

The dough then rests in the fridge before it can be use: this allows the gluten in the flour to relax making the rolling out for the shaping easier.

This method simply has the frozen butter grated into the flour at the start, for a more “all-in-one” dough. It then gets rolled out and folded a few times in quick succession. The frozen butter gets trapped between the flour, forming the layers.

I started making this quicker version as a boy, taking the idea from Delia Smith, who used this grated butter method in her recipe for sausage rolls: I simply added yeast and put in a few turns!

At the bottom of this post I have given photograph steps for incorporating the pastry in small chunks rather than grated: as in the rough-puff pastry method. This is still quicker and easier than the full-on traditional croissant dough, but is flakier than with this grated method.

Although this quicker dough can be made and laminated in about 20 minutes, the only caveat I would add is that the dough must remain cold while it is being made. So if you are making them in a warm kitchen, or if the dough starts to become at all sticky, be prepared to pop the dough in the freezer for about 15 minutes. On a cold day, though, I normally get all this done in one go.

The dough really does need to chill for a few hours after the 3 turns to allow it to relax, thereby making it easier to roll out for cutting and shaping. 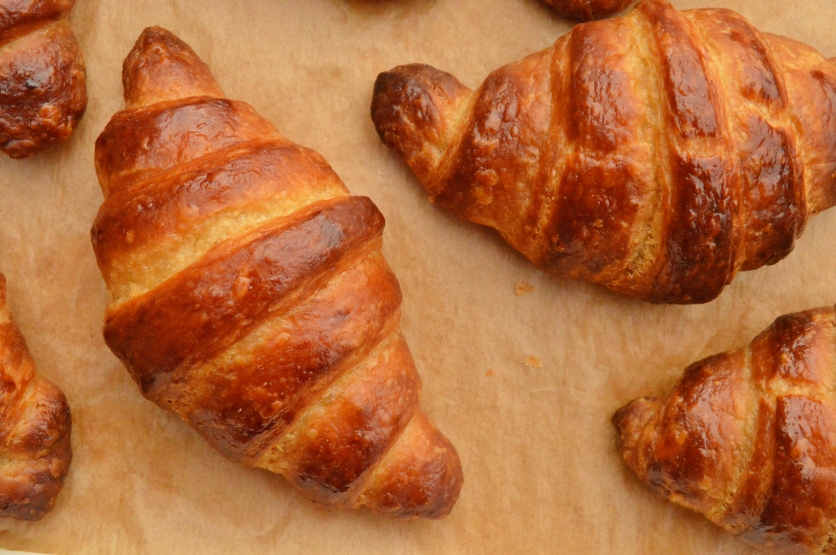 This quick method versus the traditional method

With this grated butter method, you get slightly random layers and an interior that is not quite as open, but you still get very good, light flaky results. And this approach is certainly both easier and quicker than making a full-on croissant dough. 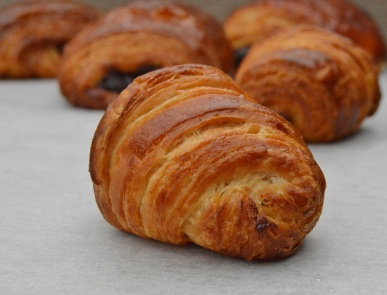 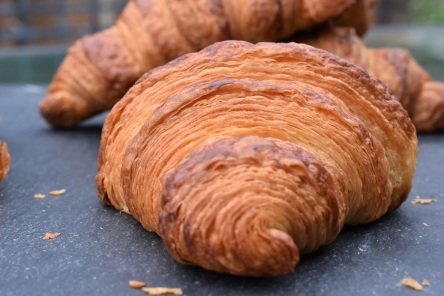 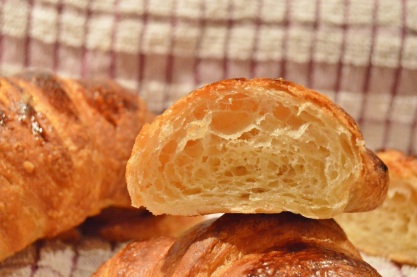 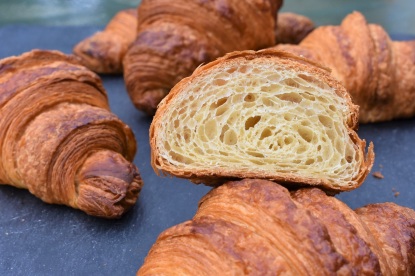 The traditional recipe for making croissants, which has full instructions and photographs for shaping (regardless of the dough you have made) is here.

These are not by any means instant croissants, as the dough needs to rest in the fridge once the turns have been completed, as well as time for the shaped dough to prove, but the hands-on time for getting the dough made up and laminated is about 20 minutes.

For resting the dough: go for at least 2 hours for the dough to rest in the fridge, wrapped in clingfilm. I like to leave the dough overnight in the fridge for even better results.

For the proving (rising): you need an hour or two at room temperature once the dough has been shaped.

TOP TIP: keep a block of butter in the freezer so you can use it whenever you want to make these quick croissants 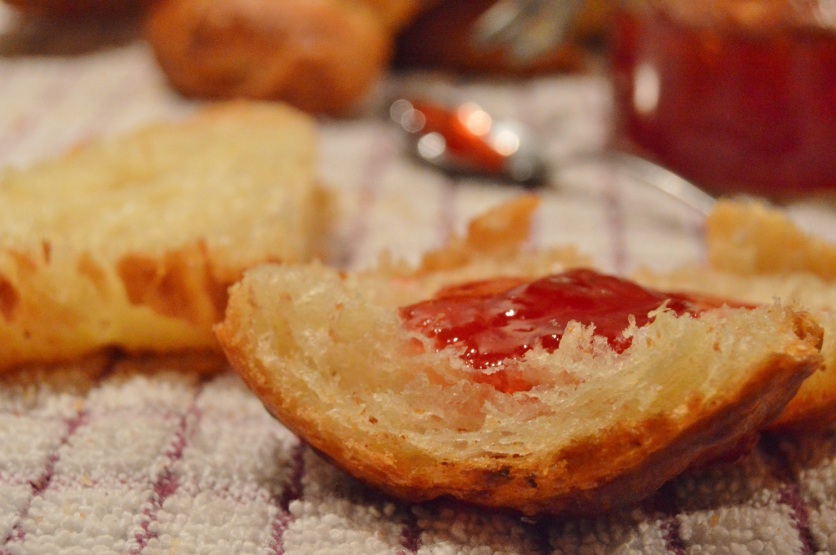 To make up the dough for laminating- which is almost quicker to make than to read this recipe:

(1) Mix the flour, sugar, yeast and salt together and grate the frozen butter into this mixture. Use your fingers to gently coat the butter strands in flour. 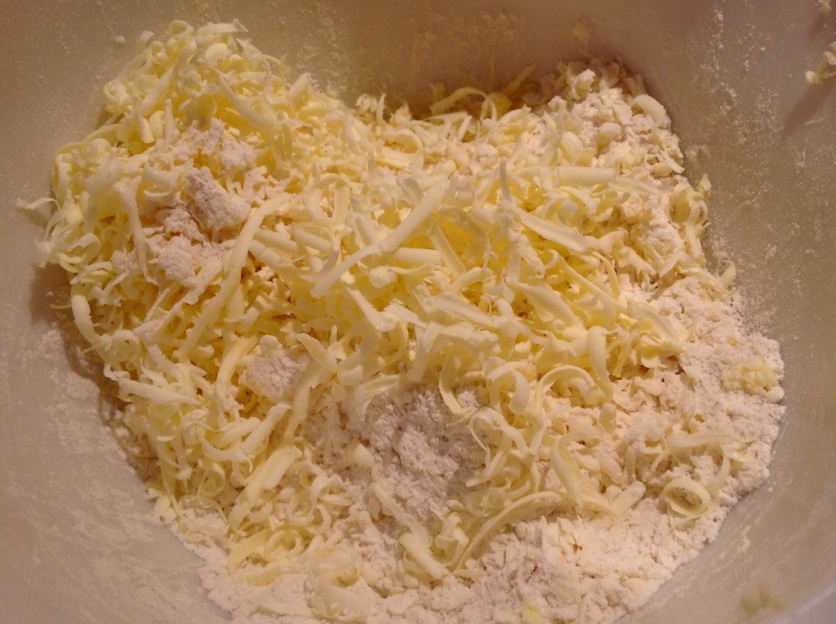 (2) Add the milk and most of the water and mix gently with a knife to form a soft but not sticky dough, trying not to crush the butter too much. Add more water if needed. 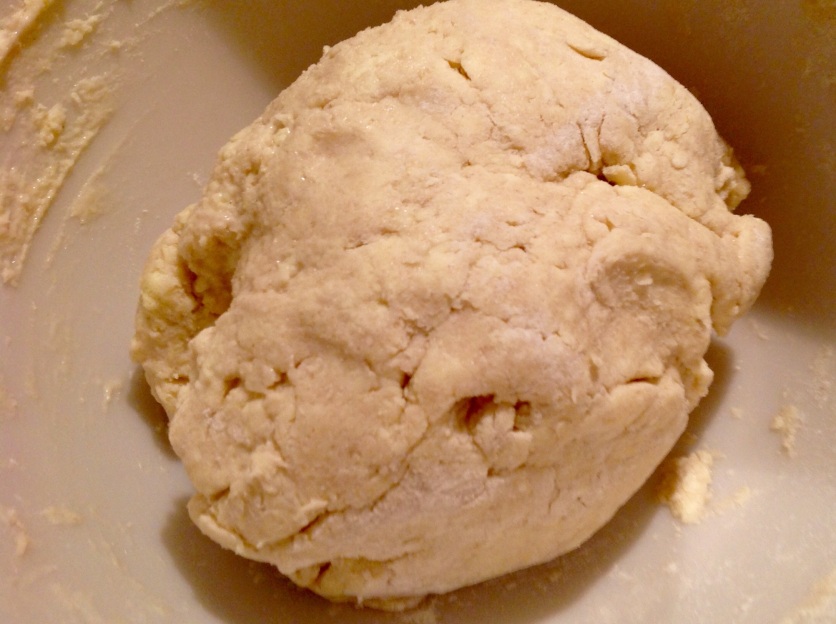 (3) Lightly dust the dough and the work surface with flour. Roll out the dough thinly to a rectangle with sides about 15cm by 60cm: these measurements are just guidelines – you want a long, thin strip of dough that is about 4 times as long as it wide here. It will look quite rough initially but bear with it. 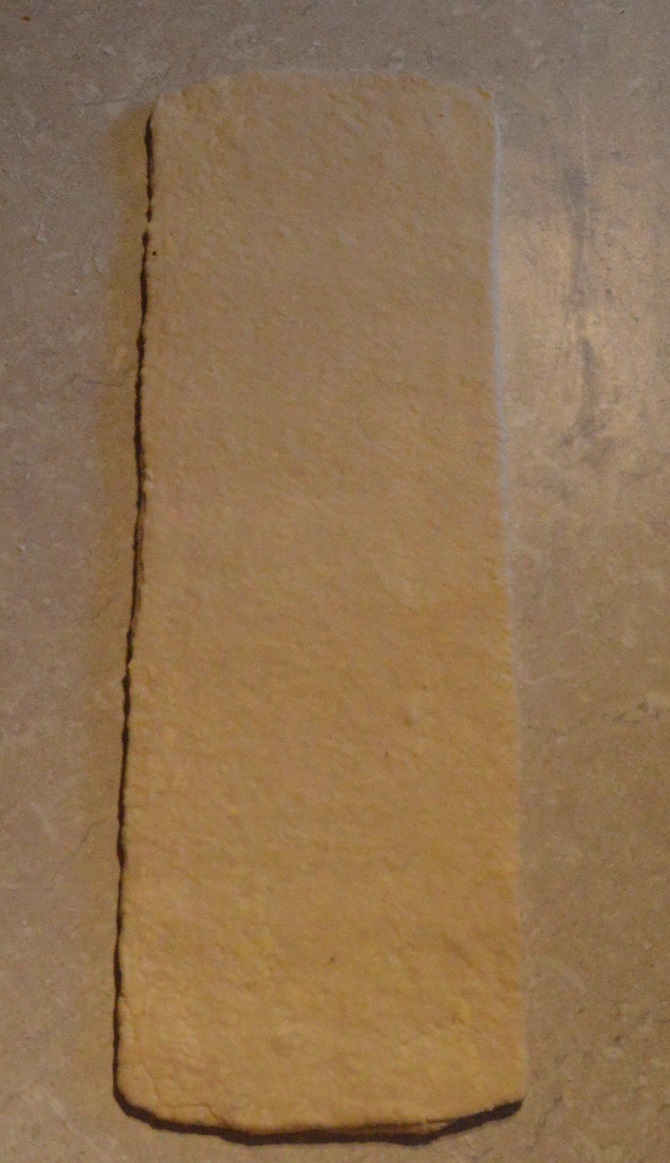 (I) Roll out dough to a long, thin rectangle

(4) Give it a book turn: with the short edge facing you, fold over the bottom and the top edge to meet in the middle and fold in half to give 4 layers of dough: 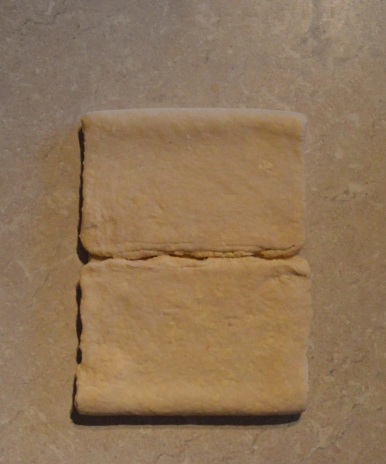 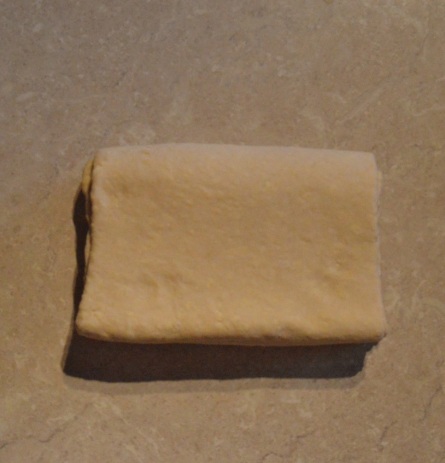 (III) Fold dough in half at the join

(5) Rotate the dough 90 degrees and roll out to a rectangle about 20cm by 60cm then go for two envelope turns* in succession, brushing off any excess flour at each stage and rotating 90 degrees after each turn.

* for each envelope turn, fold the bottom third of dough up and the top third over this (as in the photo below). 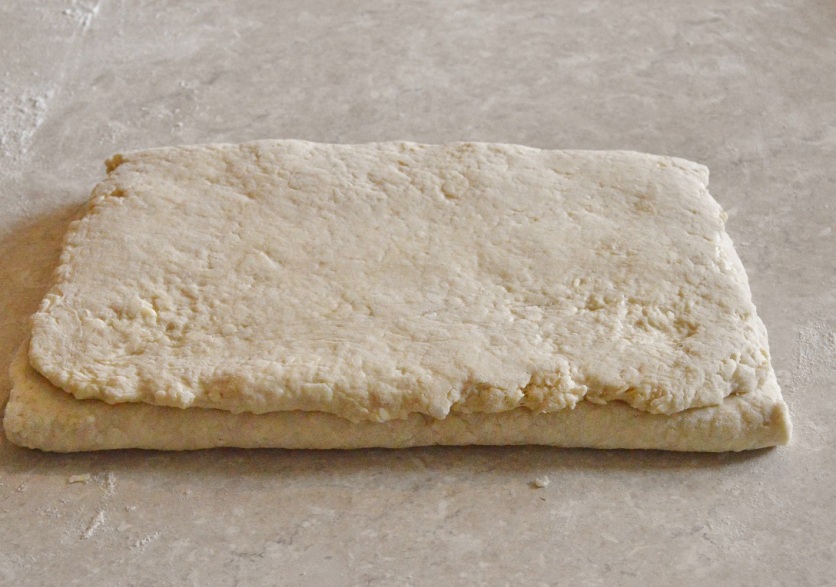 This is now the laminated dough which just needs to rest in the fridge for at least a few hours before using.

NB: if the dough starts to feel slightly warm or sticky at any point, pop it in the fridge for about 30 minutes to chill.

(6) Cover the dough loosely with clingfilm and chill for at least a couple of hours to relax it, which makes it much easier to roll out for the shaping.

(7) Roll out the dough to a long thin rectangle just over 20cm wide and 60cm long. Trim the edges with a sharp knife, cut into triangles with base about 12cm and height 20cm. Take a triangle and stretch the top third or so gently between your fingers to make them a little longer. Roll it up from the base, lightly stretching as you get near the tip and make sure the tip is underneath. Repeat with the other triangles. 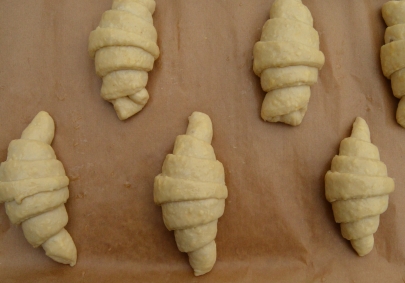 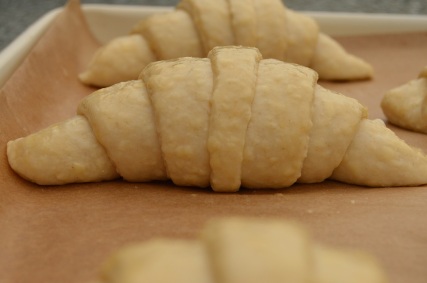 (8) Place on baking trays lined with a double layer of greaseproof paper and pop inside a large bin liner. I usually stand a tall cup in there to prevent the plastic touching the dough.

*see my main croissants post for photos demonstrating the shaping of croissants and pains au chocolat.

(9) Leave to rise for a couple of hours until they look puffy and have a gentle wobble to them. Brush with the beaten egg yolk. In a cooler enviroment, this might take longer. 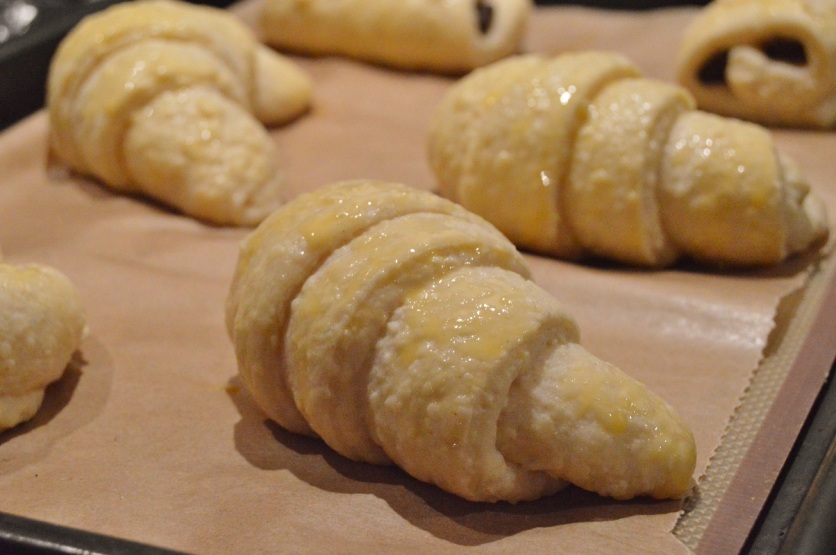 (10) Place in an oven pre-heated to 175C (fan) and bake for about 20 minutes until well risen and golden. Turn down the temperature to about 160C after 15 minutes if they are looking too dark. 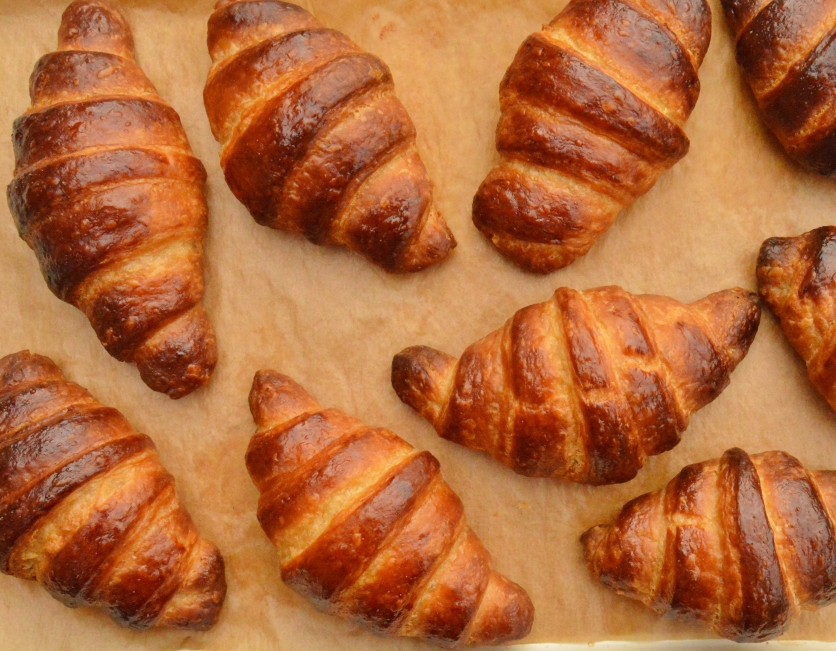 The recipes below are some of my favourite uses of quick croissant dough. And if you have a batch of dough made and frozen from earlier, even better! 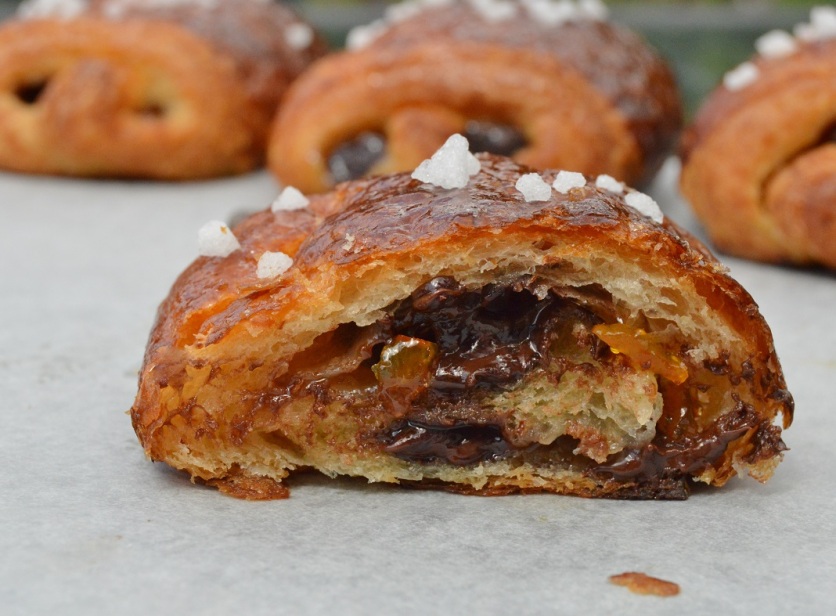 Sticky orange and dark chocolate fillings in light, buttery pastry…what is not to love?
The recipe for these wonderful pastries, along with photos of the shaping, is here. 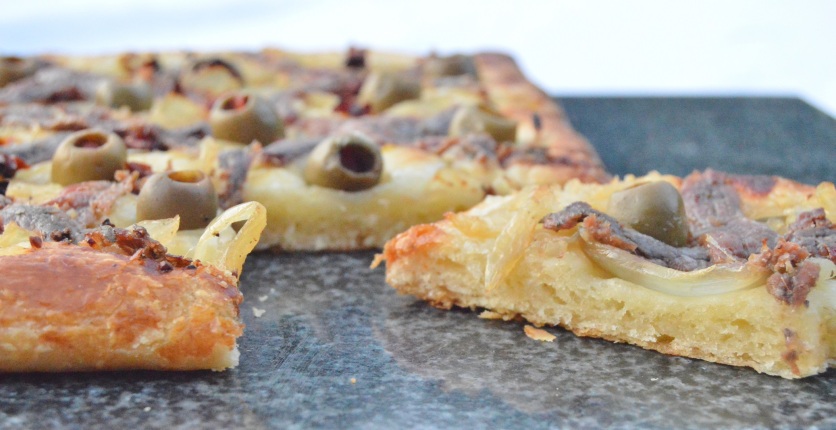 This is my take on the classic pissaladière (anchovies, olives and slowly cooked onions….), using croissant dough as the base rather than bread dough.
Recipe for croissaladière. 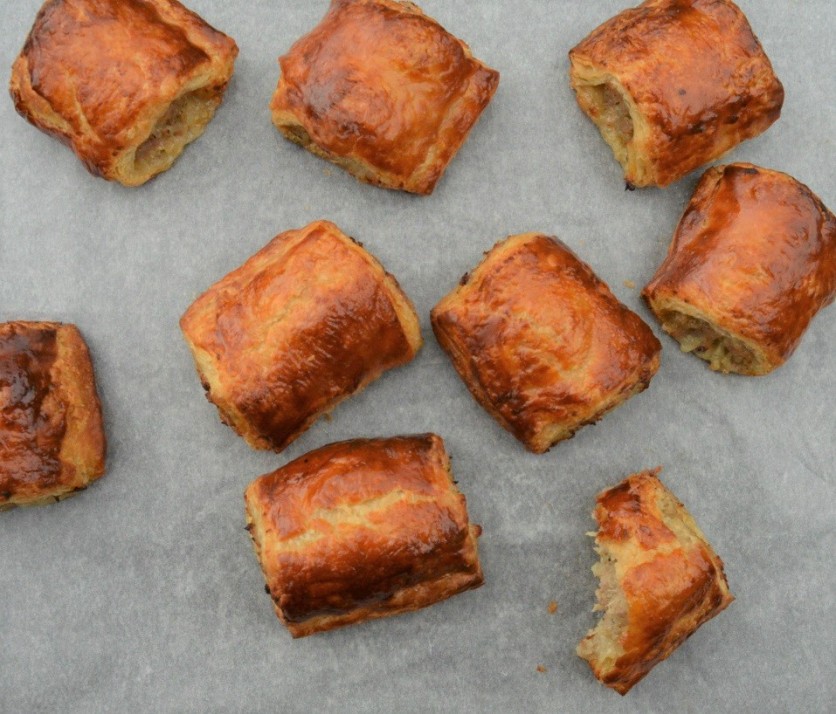 While sausage rolls made with a crisp, flaky pastry are a real comfort bake for me, using croissant dough instead of traditional pastry gives a heartier bite. 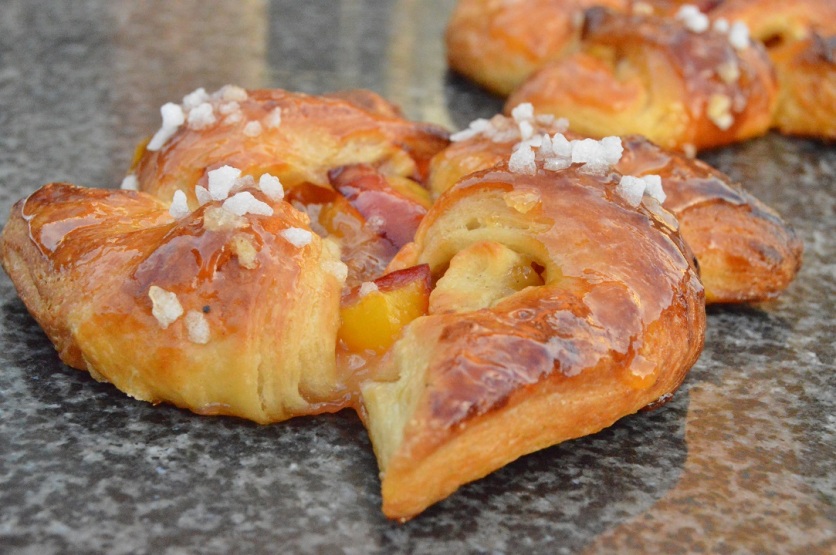 The rough-puff pastry method is the method I use more than any other method when it comes to shortcut puff pastry. It is not as quick as the grated butter method above for croissants, but it gives a better structure and is still easier than making traditional croissants.

The proportions of the key ingredients (flour, butter, sugar, salt and water) are the same as above. You just add the butter in small chunks with the flour rather than grating it in and proceed in a similar way: rolling out the dough thinly and giving it 3 envelope folds with a 20- minute chilling in the freezer between each turn.

The photos below were for a shortcut croissant dough using this method: I had also included cocoa and ginger in the dough for that particular bake: 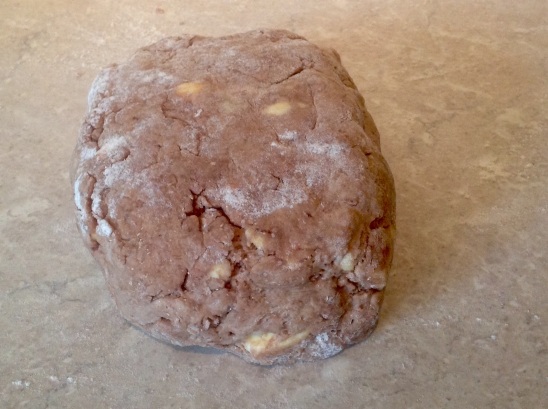 Mixing up the initial dough 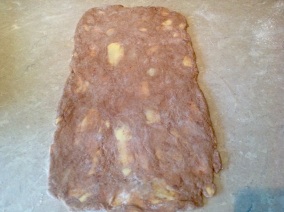 roll out thinly before folding in 3, letter-style 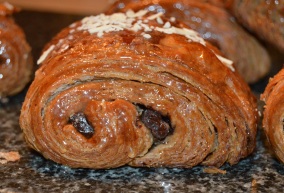