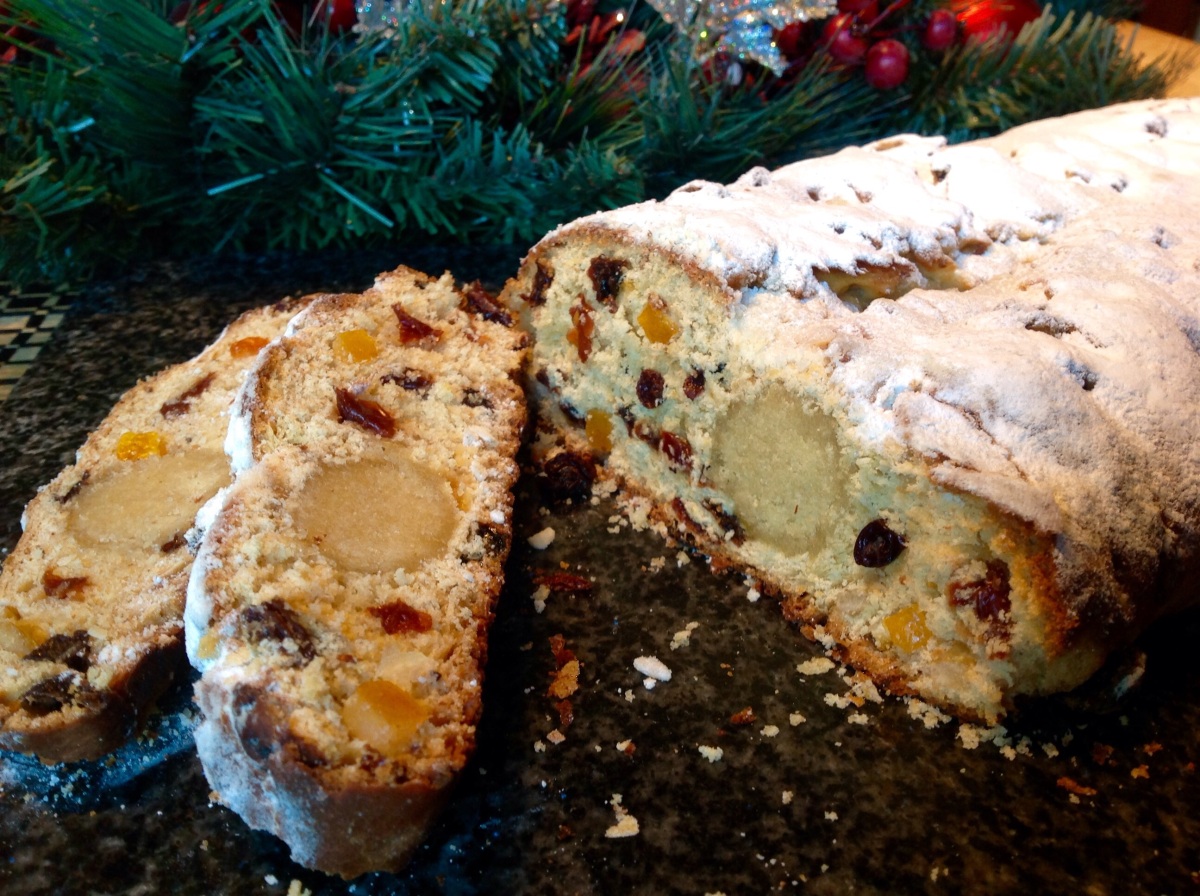 I have gone for more of a spiced brioche-type dough here, resulting in a stollen that leans more towards a cake in terms of texture than a bread, which I prefer here. For me a stollen does need a buttery, rich flavour that crumbles away and melts in the mouth, which is precisly what this brioche-style dough achieves. 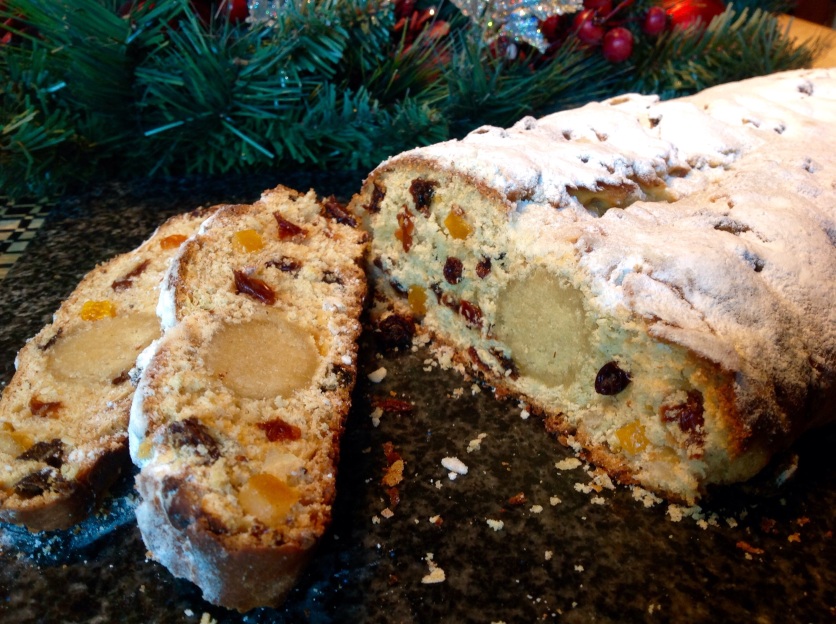 A liberal dusting of vanilla icing sugar on the freshly-baked stollen is very much the order of the day here!

This stollen can’t be made in a hurry: the basic dough needs an overnight rest for it to firm up before adding the brandy-soaked fruit to it, but it is a very easy thing to make. It also freezes beautifully.

I prefer to make marzipan, which can be made in moments and tastes much nicer than shop-bought marzipan. A little orange and lemon zest adds a subtle citrus flavour that works so well here and complements the citrus notes in the brioche.

The recipe below deliberately makes more than is needed for the filling, as I like to roll it out and coat it in tempered dark chocolate for my own (less expensive!) version of those gorgeous marzipan logs you can buy.

I often make marzipan using pistachioes or a mixture of whatever nuts I have, making a lovely change.

This recipe has arisen from several approaches I have tried over the years, taking ideas and tweaking them to give a stollen that is precisely what I want in terms of the finished bake. As I want a stollen to be a very indulgent thing to eat, I have increased the butter and the egg content.

The fruit is macerated in brandy at least overnight to allow them to plump up and give that extra touch of luxury which, along with the spices, typifies Christmas. However, the fruit is equally nice soaked in Earl Grey tea or freshly squeezed orange juice. I sometimes add some chopped nuts or vary the dried fruit.

Marzipan (makes more than is needed – or use 200g bought marzipan)

(1) Mix the flour, salt, sugar, yeast, cinnamon and nutmeg in a large bowl. Add the egg, remaining orange and lemon zest, egg yolks and just over half of the milk, and incorporate slowly, adding more milk to get very soft dough – you might not need all of the milk.

(2) Add the butter a little at a time, mixing until it has been well incorporated. Either knead by hand for about 15 minutes until smoother and elastic or use a food mixer with the dough hook attachment.

(3) Cover with clingfilm and chill in the fridge overnight to prove slowly, during which it will develop a great flavour. Meanwhile, mix the dried fruits with the brandy and leave to macerate overnight.

(4) Add the dried fruit to the dough and knead well into the dough until fully incorporated: it will all incorporate, even if it seems a bit unmanageable at first. Cover with clingfilm until you are ready to fill the dough with the marzipan.

(6) Add the almond extract (less is more!) and then, a little at a time, add the ground almonds. Mix well until it all comes together to form a soft dough. Knead lightly, cover with clingfilm until ready to use. 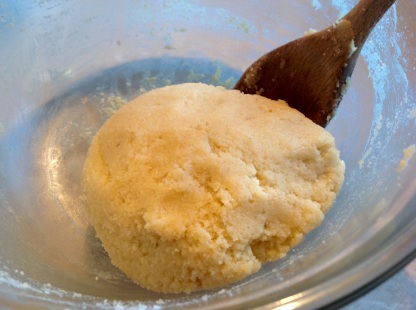 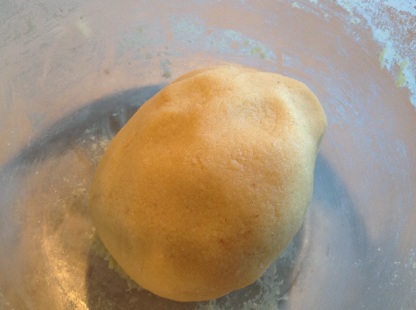 Kneaded and ready to use

(7) Turn the dough onto a lightly floured surface and roll out or pat to a large rectangle. Roll the marzipan into a cylinder that is just a bit shorter than the length of the dough and place this down the centre of the dough. Fold the dough over the marzipan and seal the joins. 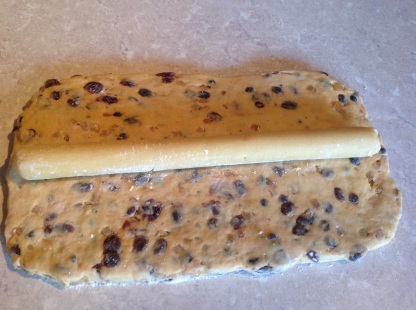 Ready to roll up 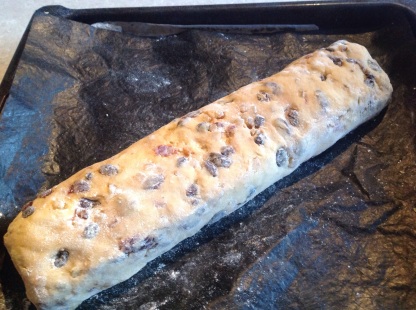 (8) Place the dough seal-side down on a baking tray lined with a double layer of greaseproof or a silicon sheet. Cover and leave to prove for a couple of hours or so at room temperature until about doubled in size. 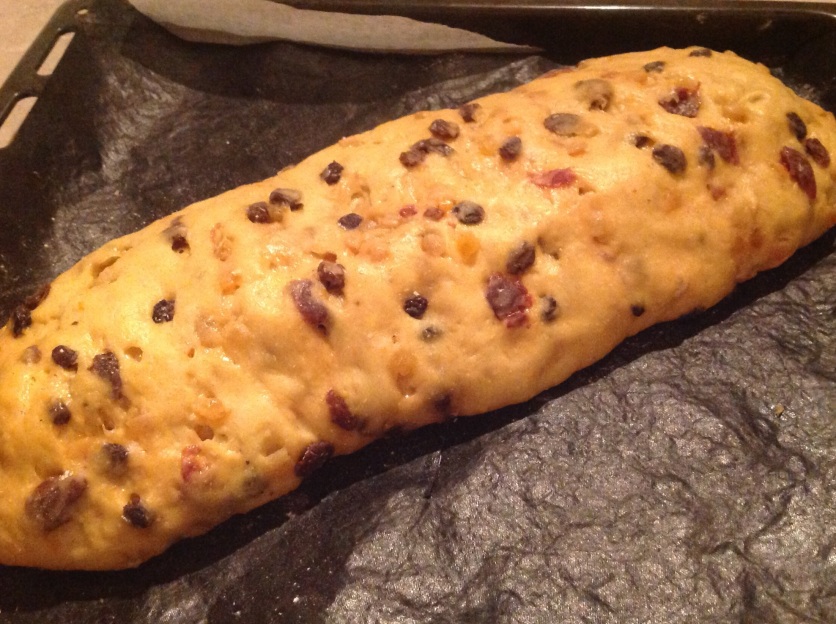 (9) Bake in an oven preheated to 170C(fan) for 20 minutes before reducing the temperature to 150C(fan) and baking for a further 20-30 minutes until the stollen is a rich golden brown colour – if it looks like it is getting too dark, put a sheet of greaseproof over it. Carefully transfer to a wire rack and brush all over with melted butter and a generous dusting of vanilla icing sugar. Leave to cool before slicing. 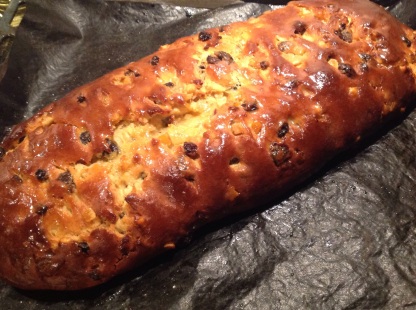 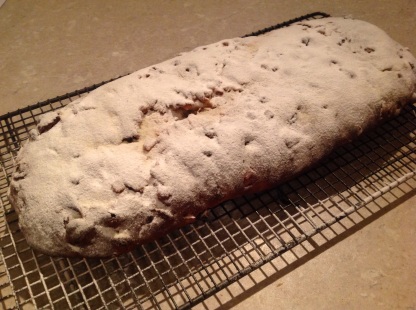 2 thoughts on “Brioche Stollen with a citrus marzipan”