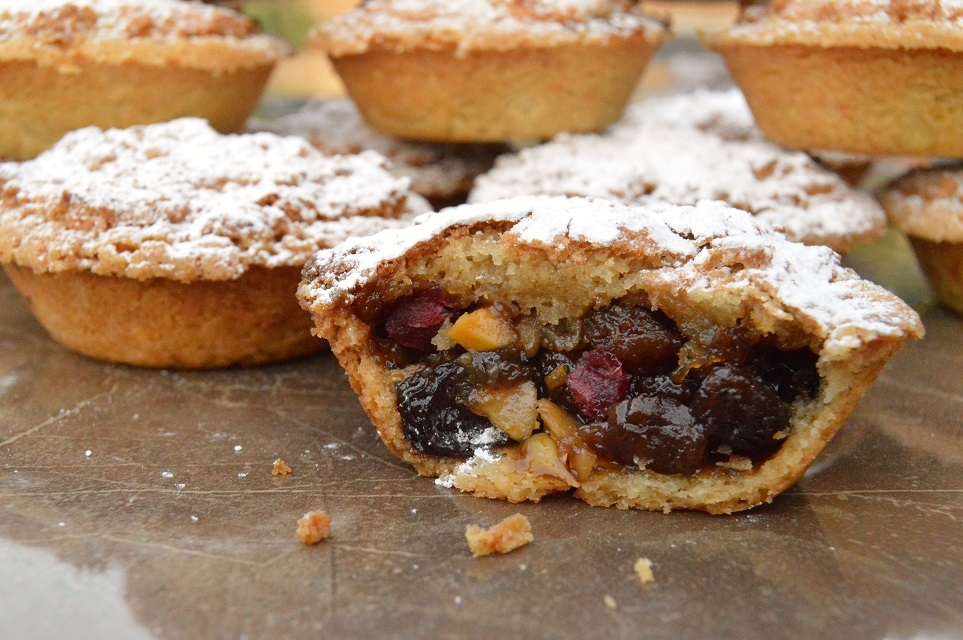 I usually prefer to make mince pies using shortbread dough rather than pastry: it makes them more special than a standard pastry mince pie and it is really no harder to make. Besides, Christmas would not be Christmas without shortbread! And whenever I have made these mince pies, they have gone very quickly.

These are also easy to make: if you can make mince pies, you can certainly make these!

I have gone for a very simple macaroon topping that is made in seconds: not to be confused with the delicate French macaron, a macaroon is a soft, chewy and almondy biscuit; quite wonderful as a biscuit in their own right, but sublime used in this way.

Using a shortbread base

The shortbread is a standard shortbread recipe, just with the addition of some ground cinnamon and the finely grated zest of a large orange, for extra Christmas undertones!

The trick with shortbread is to chill it after making up the dough, as you would with pastry, and to roll it between two sheets of greaseproof: this lets you get the dough thin without it tearing or sticking. You can chill it between the greaseproof once rolled out before cutting if you find this is easier. And also as with pastry, handle the dough gently so that the baked shortbread is light and melt-in-the-mouth.

You can, of course, simply top the pies with circles of the shortbread dough instead of the macaroon mixture, or even scatter over bits of dough for a crumble-type topping. In each case, I would run a fork around the edge to give a nice, simple finish, as shown in the photo below. 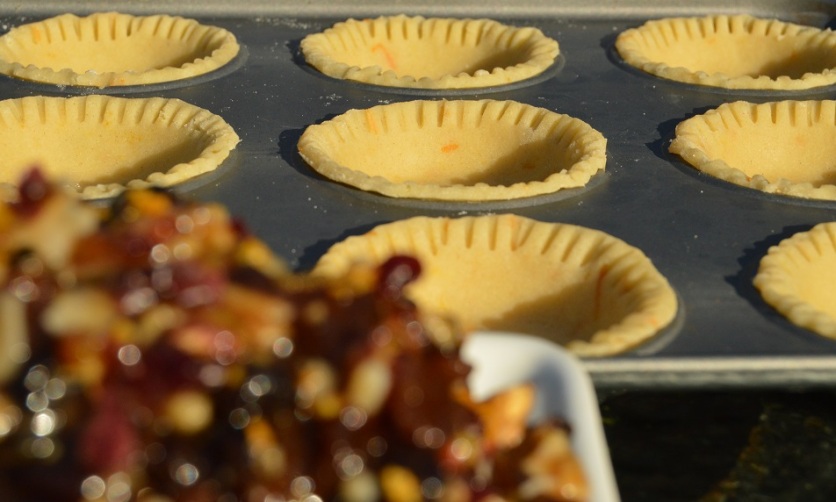 Orange and cinnamon shortbread bases ready to fill with mincemeat

For this batch I used mincemeat that I made last year, but if buying mincemeat it is worth going for the best quality mincemeat. You can jazz it up significantly with the addition of goodies such as extra chopped nuts (pistachios are wonderful!), chopped dried cherries and/or cranberries, grated orange zest, brandy or rum……..even a bog-standard commercial mincemeat can be elevated to something that is quite gorgeous this way!

While a batch doesn’t take long to make, some of the elements can be made ahead: 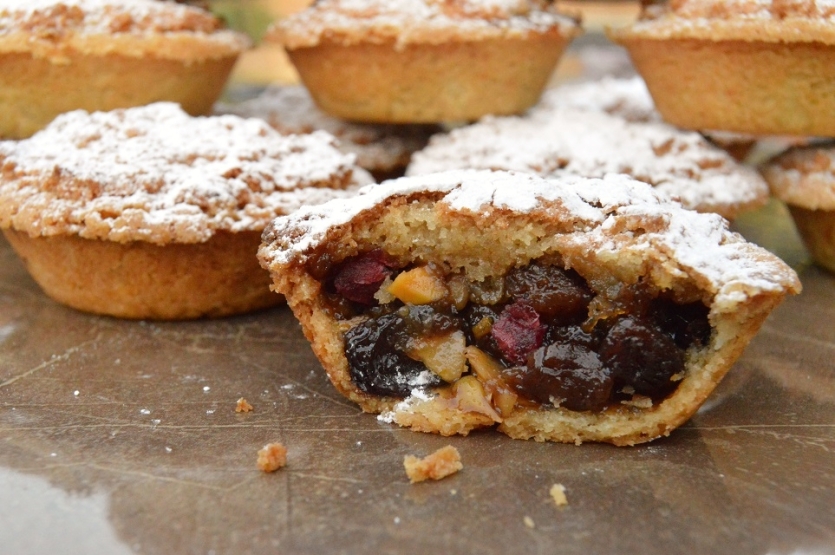 (1) Make the shortbread: mix the flour, cinnamon, orange zest and sugar togather and rub in the butter, bringing it together to a soft dough. Flatten it slightly and wrap in clingfilm. Chill for at least 30 minutes or until needed. NB: the dough can also be frozen at this stage. Just defrost and let it soften a little at room temperature to help with the rolling out.

(2) Remove the dough from the fridge and leave it to soften a little if needed. Roll out thinly on a lightly floured surface and cut out circles of dough to line lightly buttered mince pice tins. You can lightly press a fork around the edge if leaving them “open” if you prefer.

(3) Place a teaspoonful of the mincemeat mixture onto each shortbread case and flatten out a little. 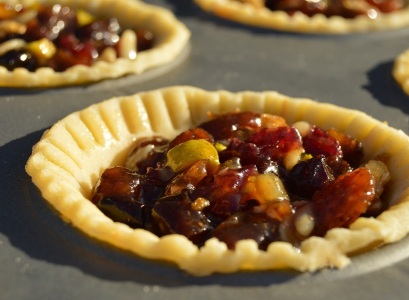 well-filled with the mincemeat

ready for topping with the macaron mixture

(4) Make the macaroon topping: whisk the egg whites in a medium bowl for a few moments with a fork until it becomes loose and a bit frothy. Add the almonds, sugar and almond extract and mix together until well incorporated: you will have a soft mixture. NB: if the mixture seems too loose, this really does not matter at all. 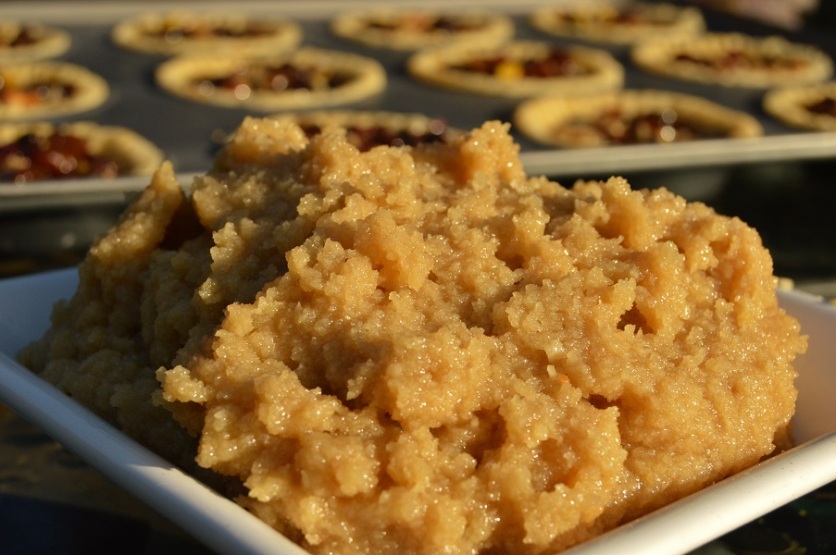 macaroon topping ready to be used

(5) Spoon over about 1 teaspoon of the macaroon mixture per mince pie, spreading it out a little: you don’t need to be too fussy about this because as they bake, the topping will naturally spread out and cover any gaps. You can run a wet finger all over the surface to give a smoother macaroon finish or else leave it quite rustic as I have done.

(6) Bake the mince pies at 160C (fan) for about 20 minutes until golden on top. Leave them to cool in the tins – this makes them easier to remove without them crumbling.

(7) Mix the icing sugar with the cinnamon, if using. Remove the cooled mince pies to a wire rack or plate and dust liberally with the icing sugar and cinnamon. NB: they can be made a few days ahead of time and reheated for about 10 minutes at about 150C(fan), along with another dusting of icing sugar if preferred!