I couldn’t resist making the Technical Challenge from the first episode on this new series of Bake Off. And this recipe really does give a rich, moist and oh-so-wicked sweet treat.

I have altered Prue Leith’s marvellous recipe somewhat to give orange-flavoured chocolate rolls, with orange zest and orange juice flavouring the sponge as well as the buttercream.

Oh the sponge: oh my word – it is TO DIE FOR! Rich, soft, squidgy and intensely chocolatey: total perfection.

I have also made these mini rolls as a mocha version, with the sponge and the buttercream flavoured with coffee.

I love buttercream but I am rarely a fan of buttercream made with twice the amount of icing sugar to butter. Sorry, Prue, I adore you and I know that this is a classic proportion, but it is far too sweet for these – even if using a dark chocolate coating to balance things.

I much prefer a creamier buttercream so I generally go for icing that is no more than one and a half times the amount of butter. Often, as I have done here, I go for equal amounts. The buttercream still sets, and is able to be piped if that is what you want to do with it for cakes, and it melts more easily in the mouth.

This gives a buttercream that is softer, more luscious and less sweet.

Chill the logs before trimming and cutting rather than after: it is easier to cut then as the rolls are much less squidgy.

It is easier to spoon the melted chocolate over the rolls using a large spoon. A couple of spoonfuls per roll, checking there are no visible bits of cake.

Give the tray a gentle shake after each roll has been covered: this will smooth out the chocolate. 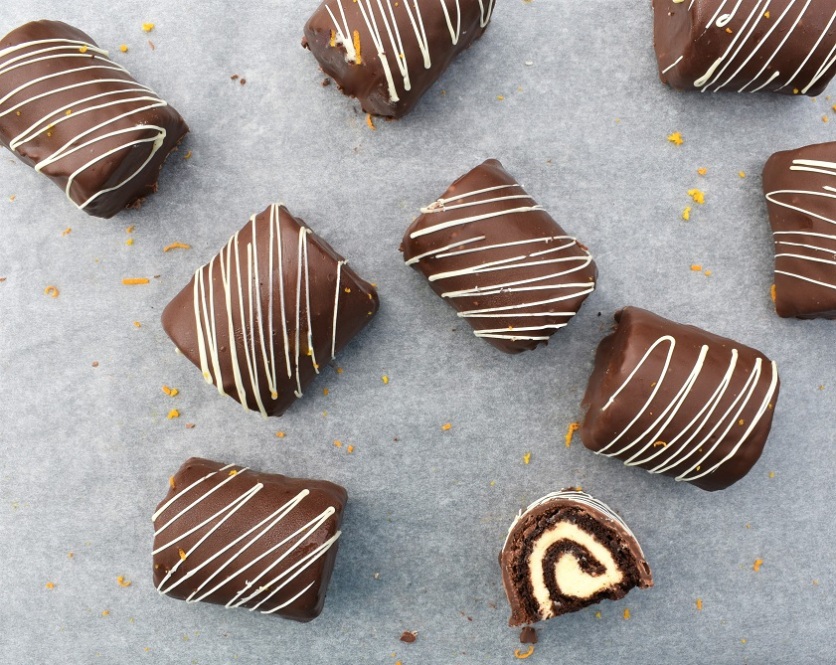 (1) Heat the oven to 160C (fan). Lightly butter two medium Swiss roll tins: I used ones with the base measuring about 13″ x 9″. Line the base of each tin with a piece of buttered greaseproof paper: even if the paper is non-stick, it really helps to butter it.

(2) Put the orange juice into a small container such as a cup and heat in the microwave until it just boils.

(3) Sieve the cocoa powder into a small bowl. Add the orange juice, orange zest and melted butter and mix together to form a thick paste. 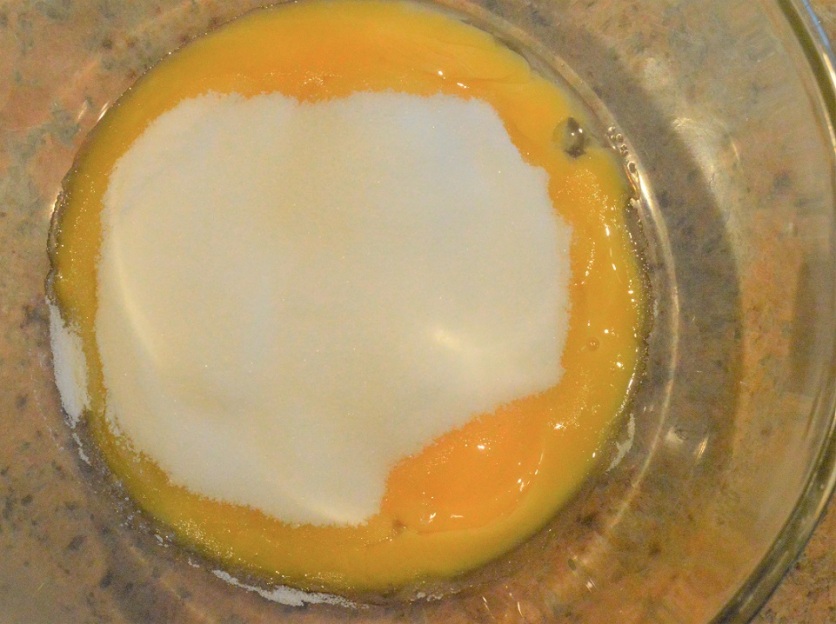 whisk the yolks & most of the sugar

Use an electric hand whisk to whisk them for 3-4 minutes until pale and thick: when you lift the whisk out, the mixture should just hold its shape.

(5) Add the chocolate mixture and whisk for another couple of minutes, scraping down the bowl a few times: you will have a mixture that is like softly whipped cream (albeit chocolately!). 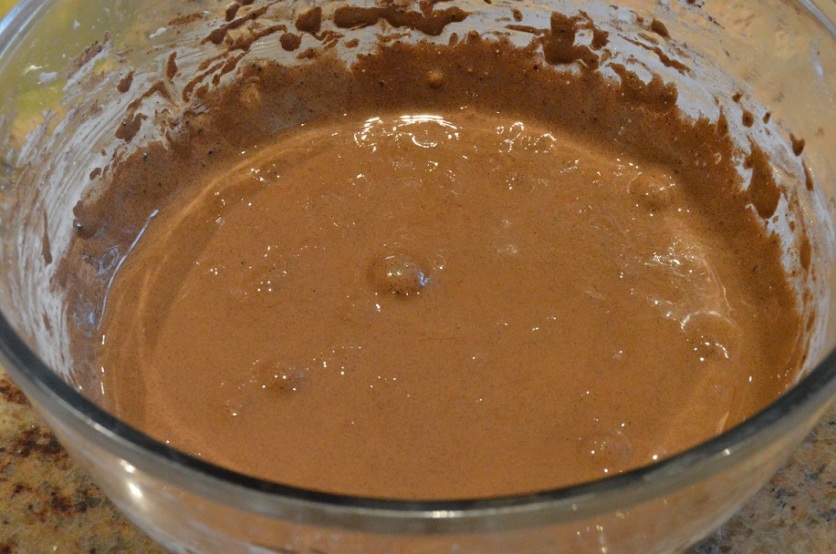 Whisk the egg yolk mixture with the paste

(6) In a separate bowl, whisk the egg whites for a few minutes until they form fairly stiff peaks. Sprinkle over the rest of the caster sugar and whisk for 3-4 minutes further to give a light meringue.

fold in the meringue into the paste

(8) Spoon the mixture between the tins and level out with a palette knife. Bake for 15-16 minutes until slightly wrinkly around the edges. 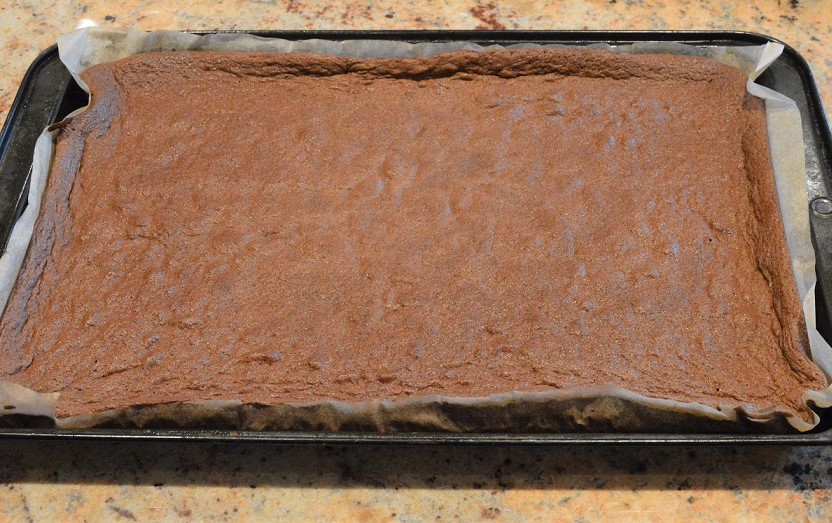 (9) Remove from the oven and place a damp tea towel over each sponge until they have completely cooled.

(11) Turn the cakes onto 2 sheets of greaseproof paper and gently peel off the paper they baked in.

(11) Using a sharp knife, make two cuts going about half-way into the sponges about 4cm from the short ends. Spread the buttercream thinly over the top.

mini rolls – scored at the top and bottom

(13) Take one of the cakes and place it with a short edge facing you. Roll up tightly, stopping just before you get to the middle. Give the cake a half-turn so the other short edge is now facing you, and roll tightly towards the middle, until it just meets the other rolled up half.

mini rolls – roll up to the centre 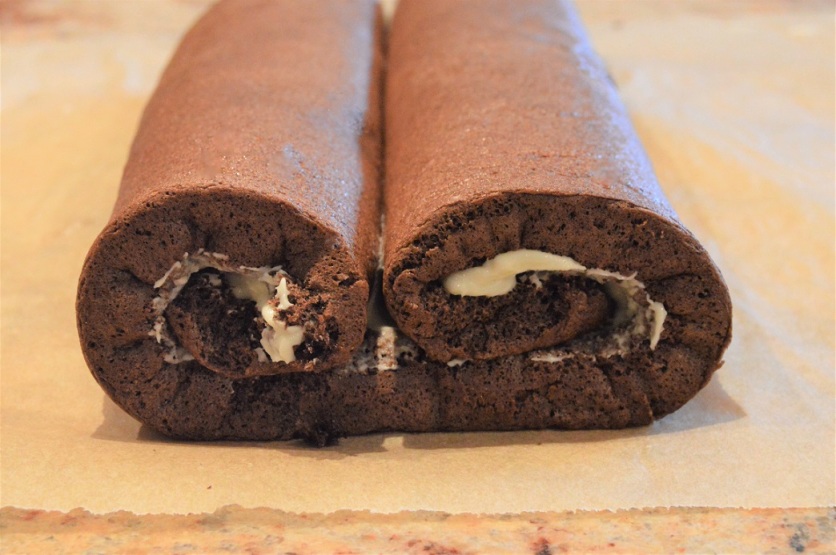 ready to cut down the centre

(14) Cut down the centre between the rolls to give two thin Swiss rolls. Turn them so the cut is on the bottom and lightly pat down. Repeat with the other sponge, giving 4 thin swiss rolls in total.

(15) Chill these rolls for at least 30 minutes so the sponge and the buttercream firm up. Trim the ends (you get to eat them!) and cut each roll into equal pieces: I prefer go for 5 per roll, so you end up with 20 mini rolls.

(16) Place the rolls seam side down on a cooling rack over a sheet of baking paper. Spoon the chocolate over each mini roll to coat. Leave to set.

ready to coat in chocolate

(17) Drizzle over the white chocolate as roughly or precisely as you want.

(18) Slide a palette knife carefully under each roll to remove them from the rack. You can dip the knife in hot water for a few minutes to help prise them off if needed.