These are small-scale versions of possibly THE most classic cake. I love to serve them as part of an Afternoon Tea or just as they are, devouring them while watching television!

I went for a couple of flavours this time: the simplest of flavours (strawberry jam & vanilla cream) and a fancier one (lemon curd buttercream & blackcurrant).

I use vanilla sugar for the cakes: I always like to have a jarful to hand as it adds the most wonderful flavour to cakes and biscuits.

I always like to have a jar full of vanilla sugar: just pop a few vanilla pods, which have been sliced lengthways with the seeds scraped out into the sugar, into the caster sugar. Put in an airtight container. Within a few weeks the sugar will take on a lovely vanilla flavour.

I use the 12-hole mini cake tins from Lakeland: basically loose-bottomed muffin tins but with perfectly vertical sides which are essential for cakes such as these. They do give excellent results in terms of clean edges although for tins claiming to have a non-stick coating, they DO have to be well buttered and lightly floured to enable the cakes to turn out cleanly.

These tins are also excellent used to make mousse-type desserts and cheesecakes where there are layers involved; I made up my version of Gü’s After Dark Gü-Zillionaires’ Puddings using them:

After Dark Gü-esque Zillionaires’ Puddings: ready for the acetate to be removed

You can make these cakes in larger tins and cut out circles but you will invariably get rough edges. Any off-cuts, though, are great frozen and used later as a base for trifles!

For these cakes, I filled them with strawberry jam and whipped double cream that had been flavoured with vanilla. They were dusted with vanilla caster sugar. Sometimes, total simplicity is best! 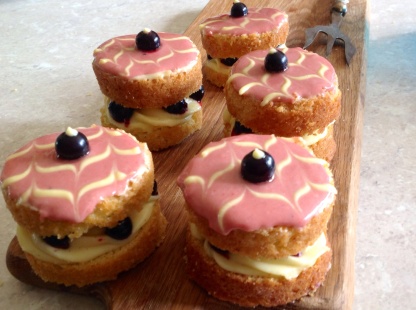 I filled these with a vanilla buttercream, into which some lemon curd was mixed. Blackcurrants that had been steeped in Cassis also went in the middle. These cake were topped with a little fondant feather icing (blackcurrant flavour with lemon flavour): very tangy, which works well with a cake.

They could just be filled with lemon curd, but I wanted the filling to hold its shape more and not dominate in terms of sharpness along with the blackcurrants: the lemon curd buttercream gives a very happy medium.

You will also need a 12-hole mini sandwich tin

(2) Whisk the butter, sugar and lemon zest for several minutes until pale and very creamy. Add the eggs a little at a time and whisk well before adding the next bit of egg to avoid curdling. Fold the flour gently with a large metal spoon until well incorporated. Alternatively, go for the all-in-one method by mixing the ingredients (plus a level teaspoon of baking powder) together in a large bowl, taking care not to over-beat: over-beating will develop the gluten in the flour and result in cakes that are not as light and melt-in-the-mouth as they should be.

(3) Spoon into the cake tins, coming to just over half full and smooth the tops. You should have some mixture left over: this can be used to make some more. Bake for 15-20 minutes until well-risen, golden and springy. Leave for a few minutes in the tin and then invert to a wire rack to cook fully. Spoon the rest of the mixture into the tins and bake the final few.

(4) While the cake is cooking, make up whichever filling you are going for.  Slice the cooled cakes horizontally and fill. Decorate or dust with caster sugar.