I have posted several focaccia recipes on this blog, and while I make my roasted garlic focaccia many times more than any other flavour, I do like to play around a little. This time, I used ingredients lurking around in the fridge and the larder! 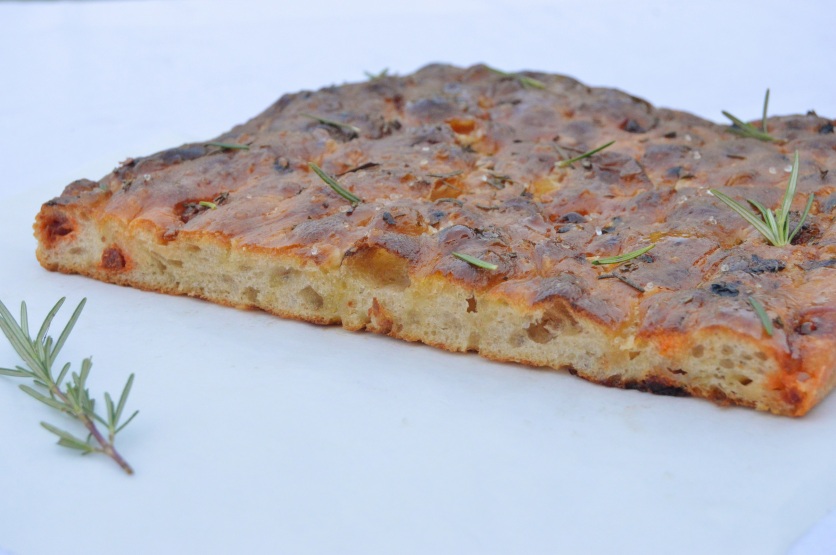 Slowly roasted onions or shallots, with their delicious sweetness, salty Parmesan and chunks of spicy chorizo make a wonderful focaccia, especially when time is allowed for the dough to rise very slowly. The juice that comes from the roasted onions gets worked into the dough itself, added flavour throughout the dough, in addition to the pieces of the other goodies that are suspended in the dough!

Some rosemary-flavoured extra-virgin olive oil spooned over the just-baked focaccia finished these perfectly.

While you can knead this dough traditionally, the very high water content (which is needed to get the type of aeration of the dough that is essential for focaccia), I find it much easier using a “grab and slap” method: with oiled hands, simply grab a large handful of the dough, pull it high out of the bowl and slap it back down into the bowl, repeating for about 5 minutes or so to help develop the gluten, rotating the bowl every now and then: the gluten will develop enough at this stage but it will develop further during the dough’s very slow prove in the fridge.

Alternatively, pop the dough in a food mixer with the paddle or whisk attachment (not the dough hook), and put on medium-high speed for about 20 minutes.

The recipe makes one large focaccia: the dough covers one of my baking trays that came with the oven that is almost the size of an oven shelf. This gives a wonderfully thin focaccia, which is my preference. Alternatively, split the dough into 2-3 portions for putting in smaller tins.

I sometimes bake focaccia in round sandwich cake tins, to give thicker focaccia: these ones are ideal sliced horizontally and filled with cheese and ham before being toasted or griddled. 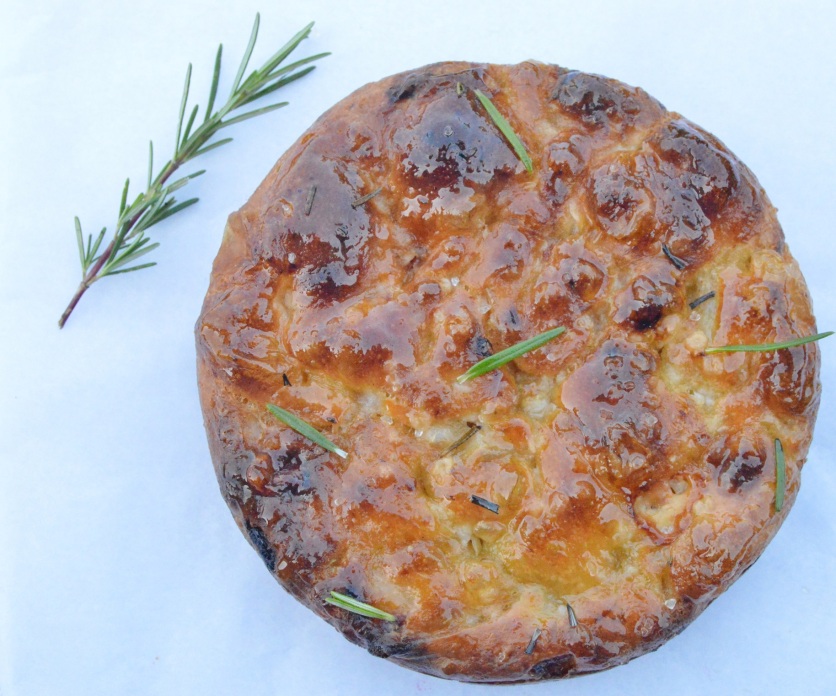 Smaller focaccia, fresh from the oven with the olive oil still glistening!

For flavouring the dough:

(1) In a shallow oven-proof dish, mix the onions, rosemary and oil together. Place a lid or cover with foil and roast gently for about an hour at 150C until the onions have softened: the gorgeous liquid from the onions will be used in the dough. Leave to cool. NB: you can cook them further in a pan on the hob to caramelise them if you prefer.

(2) Mix the flour, salt and yeast together in the bowl of a food mixer. Add the cooled onions and rosemary, along with their oil and pour over all the water. Don’t worry that it is very wet as the wetter this dough is, the better the hole structure of the focaccia. You can even add a little more of the water for the best hole structure.

(3)  Use the food mixer with the paddle or whisk attachment and mix on medium speed for about 20 minutes or until the dough becomes shiny and smooth.

(4) Cover with clingfilm and refrigerate (or at cool room temperature) for several hours or until well risen: the slower the rise, the better for the best flavour.

(5) Turn out the dough onto a large baking sheet that has been lined with greaseproof paper. Flatten it out over the baking sheet with the palms of your hands and your fingers. Sprinkle over the Parmesan and chorizo and drizzle over a little olive oil. You can push these into the dough if you like.

(6) Leave for an hour or so at room temperature, until well risen: it will have many tiny bubbles over the surface. Toward the end of the rise pre-heat the oven to 200C(fan). NB: you do not need to cover this dough as it rises as the oil will prevent the surface from drying out.

(7) Make dimples all over the surface with your fingers, going down to the greaseproof. Drizzle with a little more olive oil and sprinkle over a some sea salt. NB: the dimpling allows some of the oil to pool at the bottom of the hole, seeping into the dough as it bakes. It also pushes out the dough around the dimple to create more bubbles – acting like a ballon does when you squeeze it.

(8) Bake for 20-25 minutes until the focaccia is a deep golden brown colour. Remove from the oven and drizzle over more oil. 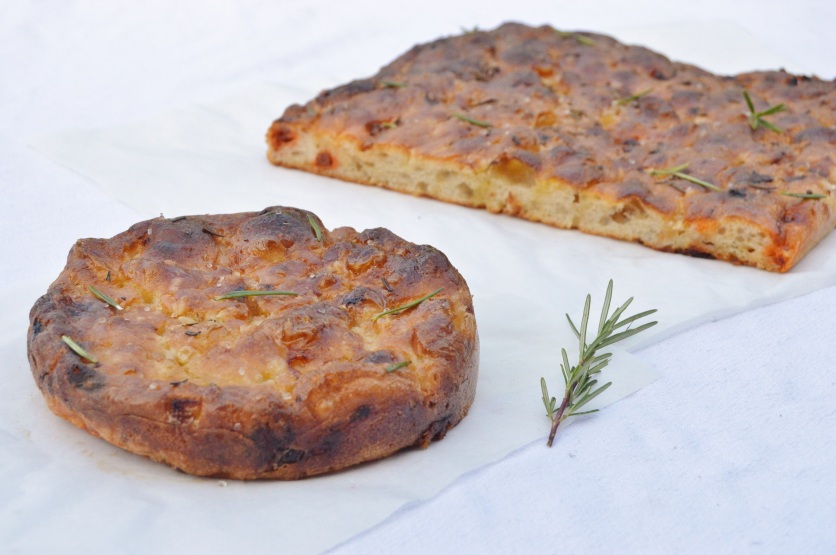