I am such a fan of Wagon Wheels but they have become noticeably smaller over the years so I felt I might as well jump on their band wagon(!) and go even smaller, using macarons: after all, miniature things are among the most exciting thing for me to both bake and eat. 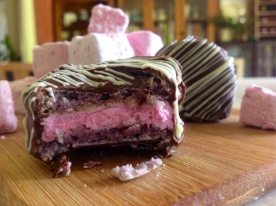 Granted, turning macarons into “wagarons” is more than a mere flirtation with posh, but you will hear no cries of shame from these quarters!

I initially decided just to make some blackcurrant macarons and fill them with a tangy, light-as-air blackcurrant marshmallow but then decided to coat some of them in dark chocolate for my take on Wagon Wheels. I used chocolate that had been subtly flavoured with chilli which worked so well with the other components, giving a real flavour explosion in the mouth without the whole affair being too wacky for its own good! And chilli does works so well with blackcurrants. The macarons inside retain their crispness beautifully, even several days later (if they last that long!).

As I like macaron shells to taste of what they are meant to represent, I used some blackcurrant powder in the macaron shell mixture. The recipe for macarons is here.

The marshmallow here has to be very fruity rather than sickly sweet and must dissolve effortlessly on the tongue: I tweaked a combination of marshmallow recipes to get the right texture and flavour that I wanted, reducing the sugar a little and increasing the fruit content from many of the recipes I have used before.

This recipe below for marshmallows will fill a full batch of macarons with a lot left over to be made into marshmallows for sweets.

For different fruit flavoured marshmallows simply replace the blackcurrant purée with whichever fruit purée you want to use.

Simply dollop some the marshmallow mixture onto a shell and sandwich it with another shell. As the filling is very light, you can afford to use more filling than you might normally use for macarons.

You can pipe the marshmallow: spoon the mixture into a piping bag fitted with a nozzle of choice. Chill for about 15 minutes (so the mixture sets just enough for the piped marshmallow to hold its shape) and use it to sandwich pairs of macaron shells.

Simply dip the marshmallow-filled macarons  in tempered dark chocolate, perhaps with an extra drizzle of white chocolate over it for the utter decadence of it all!

Spoon the mixture into a rectangular container lined with clingfilm and chill until set before turning out, cutting into cubes and rolling in a mixture made of equal amounts of icing sugar and cornflour.

(1) Whisk the egg white in an electric mixer until very stiff: even though it seems as if there is very little of it, the egg will increase in volume!