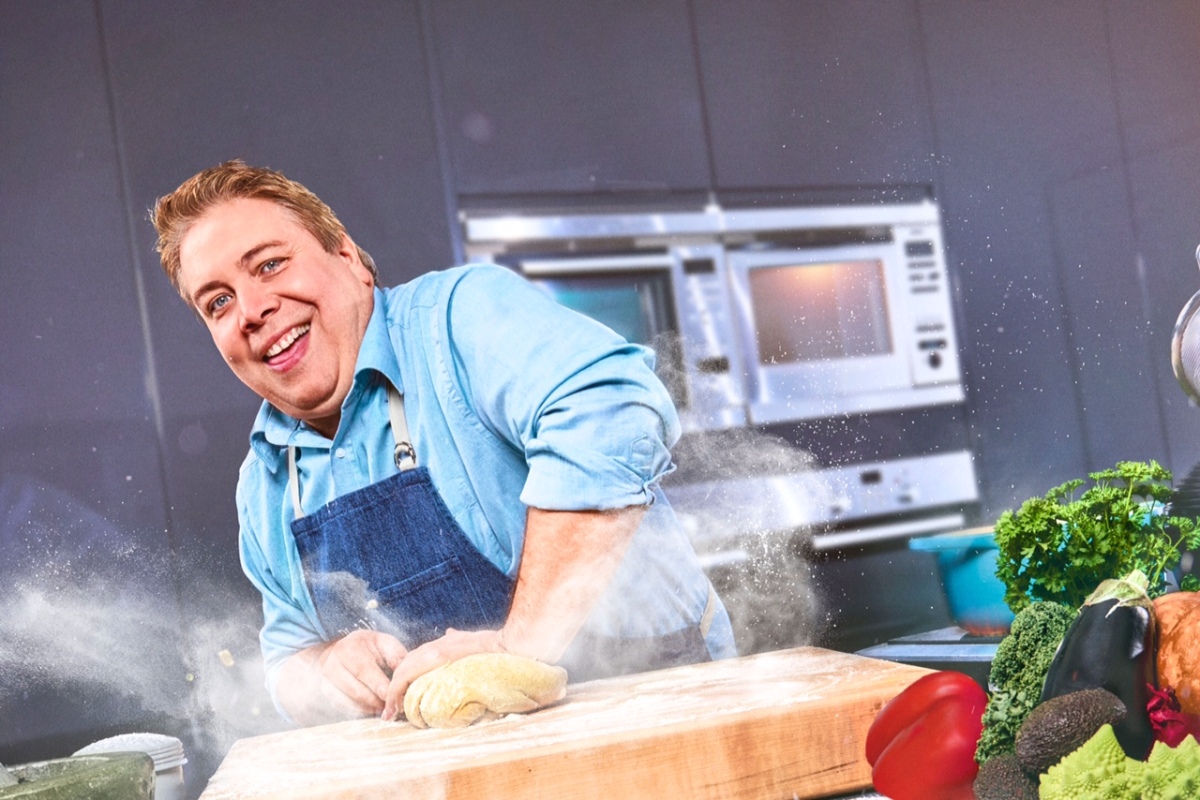 One of my greatest ambitions – to cook on television – came true when I was chosen to participate in Series 1 of Britain’s Best Home Cook for BBC television.

Being on Britain’s Best Home Cook (re-named Best Home Cook for Series 2) was hands-down the most exciting thing that has ever happened to me. Seriously, nothing has come close to this: yes, it was a challenge and yes, there were many moments of self-doubt, but what a great experience it was.

As a teacher, I try to teach resilience and I often encourage my students to go beyond their comfort zone. I am proud that I was able to put my money where my mouth is, as it were, by taking part on Britain’s Best Home Cook. 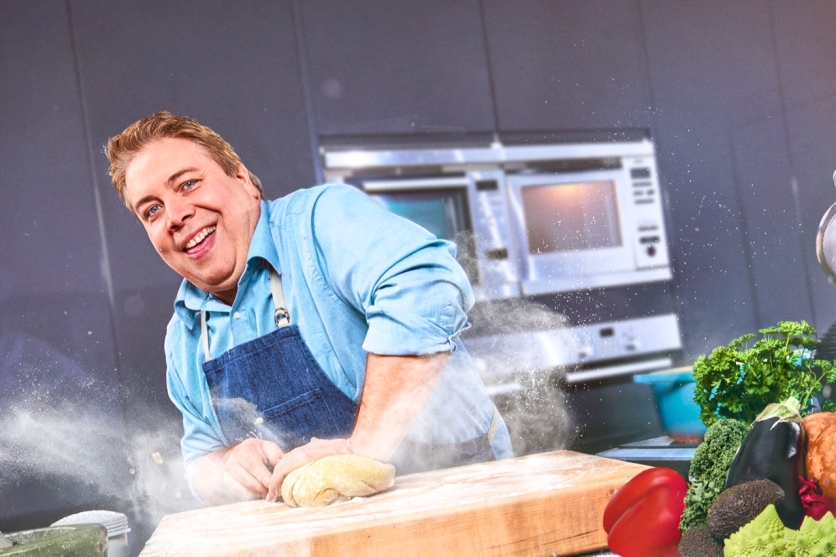 To meet, let alone cook for, Mary Berry, Chris Bavin and Dan Doherty was such a special experience. And this was topped off by having the deliciously effervescent Claudia Winkleman presenting.

The rollercoaster of auditioning

I had tried for Bake Off over the years, getting to a few audition rounds and the like for several of the series but oh my word: presenting your bakes at a Bake Off audition only to have a dead-behind-the-eyes casting producer who responds as if she had been chewing wasps and sucking lemons does not give you a warm feeling inside!

By contrast, the audition process for Britain’s Best Home Cook, however, was a much more positive experience: the producers were “with us” as home cooks every step of the way and that really helped you give your best.

It was a long process: several months since I filled out the application form, but each stage was great fun despite feeling in a kind of limbo for that period of time.

The real butterflies-in-the-stomach feeling came every time there was a ‘phone call from the production company and I would immediately think “they’re going to tell me I’ve gone as far as I can in the process”.

I genuinely never expected to get chosen for the programme, let alone reach the final. I think I was more surprised than anyone, especially given so many good cooks had left the competition throughout the weeks.

When I was selected, the main challenge I set myself was to enjoy the cooking, relish the experience and be myself. And I did! Granted, I was a little restrained in terms of my behaviour (those who know me are aware I have a very naughty sense of humour), but elements of that came across in the edit – which was quite funny to see!

just prattling about to myself!

Seeing how a TV programme was made and edited was fascinating for me. I love cookery programmes and TV cookery competitions, so this ticked so many boxes.

I get quite animated!

We were so lucky that we had a great crew: everyone involved in the programme on the technical side, including camera operators, home economists and our much-used medic, were worth their weights in gold! A particular shout-out to the fabulous Karim and Zoe who were gems when it came to helping us out with technical hiccups!

I genuinely loved every moment – even despite some dubious dishes that I presented (under-cooked chicken; a massacred chicken kiev and an embarrassingly solid ginger cake come to mind!), not to mention changing my fish dish in Episode 2 literally as I walked into the kitchen.

My fish dish: it was fine but not what I intended!

My errors were mostly down to time issues: in a competition such as this, even a slight mishap can throw you back significantly in terms of time, making it hard to juggle everything around and allow time for refinement: so a “chucked on a plate” approach was needed on a couple of occasions to have something to present to the judges.

making risotto in an Elimination Challenge

I loved those moments when the judges, Claudia or the producers would come and have a chat while cooking: while it made things a bit frantic at times, I learned to “down tools” and savour those moments.

One of the many things I learned through the process is to be a speedier cook at home and to be more creative with ingredients. I also picked up many invaluable cooking tips from the other cooks and the judges.

I had so many favourite foodie memories from the series from the other home cooks. The highlights include: Tobi’s chicken gizzard pie; Pippa’s Bao buns; Dipa’s spiced roast chicken; Trevor’s hogget roast.

My low-points certainly include the dishes mentioned above – I still shudder at that chicken! But there were dishes I was so proud of:

Not to mention meeting some amazing fellow homecooks. Sharing the house with them made the process more of a homely affair for sure -which was what the programme was all about.

I was fortunate that the house we stayed in during the weeks (we went home at the weekends) was literally 10 minutes from my house.

I found its close proximity to my home psychologically comforting, especially on occasions when I found the competition particularly challenging – such as when I had something of a “blip” just past the half-way stage and lost a lot of confidence. But just being able to chat with the others worked wonders to help move forward.

when the mood needs lightening!

My shock at being named as a finalist

Each week I was delighted (and surprised!) to have got through to the following week, so to have made the final was the icing on the cake. Especially to cook with Dipa and Pippa, with whom I had become particularly close. 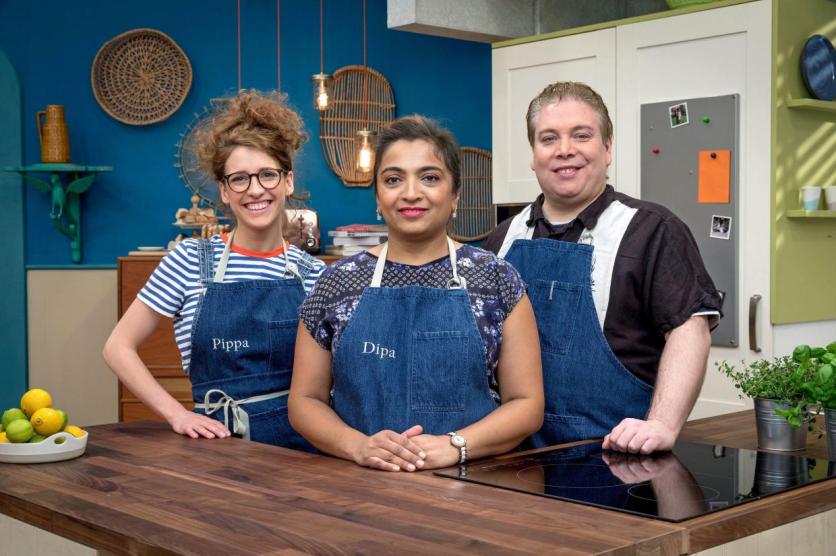 Britain’s Best Home Cook: proud to share the Final with Dipa and Pippa

In our final challenge – a two-course dinner party – I could not have been happier with how my dishes turned out. And it was wonderful that Dipa’s and Pippa’s dishes went to plan, too.

my Beef Wellington dish in the final

I cherish the moments in the final when Mary Berry said my dessert was “to die for” and Chris Bavin stated that my Beef Wellington was one of the best he has ever tasted. But equally it was such a buzz when Pippa and Dipa got praise – as indeed it was throughout the competition when a fellow cook had delivered a knock-out dish.

Pippa wins in the Final of Britain’s Best Home Cook

I was delighted for Pippa to have won. I certainly never expected to win and I thought it would be between Pippa and Dipa in the final – but it was an honour just being there and getting to cook all of those dishes!

My advice to anyone who is thinking about applying for something that they would love to do, whether it is a job opportunity or to be a participant in a television programme is to go for it.

Pippa, Dipa and me with Claudia & the judges at the Final

Honestly, I would have never believed I would be selected to cook on television, so if I can be picked, anyone can be!

Since the show was aired I have done many private cooking lessons and food demontrations, as well as teaching cooking skills at cookery schools. I have also had many radio slots, talking about food ideas, tips and answering listeners’ questions related to food. I love that: I can chat food for hours!

So what’s next for me? I would love to write a cookery book: I have so ideas many drafted out that I have worked on over the years and to have one book published would be another dream come true. But to do more writing for a magazine or newspaper would be a tremendous thrill. I would also love the opportunity to do more cooking-related work on television.

me: overjoyed to be holding the BBHC book

Mind you, I have been joking with friends that if they ever let a nonceleb gate-crash Strictly, I’m a celebrity… or The Island with Bear Grylls then I would be there like a shot!

But they are dreams, and even if they amount to nothing, I still count myself very lucky to have had this experience: the memories of being involved with Britain’s Best Home Cook and meeting some wonderful people will stay with me forever.

A trailer for Series 1, including each of us popping up, can be viewed here.

Full information about this wonderful tv programme, from Keo Films, including the low-down on all 10 of us, is at this link: Britain’s Best Home Cook

The much revamped Series 2, becoming Best Home Cook – with Angela Hartnett taking over from Dan as judge – looks very swanky indeed with some truly gorgeous looking kitchens for the home cooks.  I hope the cooks had as enjoyable an experience as I did in Series 1.