These tangy, refreshing and very simple desserts need to be eaten with no shame whatsoever! They are great for parties, buffets, Afternoon Tea or just as a sweet treat whenever the mood takes you.

These dessert domes take very little hands-on time to make and are very good to use up what might be lurking in the cupboards or fridge: fruit curd, coconut, chocolate, biscuits…..

Stale biscuits: no need to waste them

If you have stale biscuits (if biscuits last long enough around the house to go stale!), simply pop them in the oven at about 120C(fan) for 20 minutes or so and then leave them to cool and re-crispen up: perfect here or for any cheesecake base.

They are a version of my passion fruit and peach domes I made some time back, this time going for a hit of orange and coconut with a hint of dark orange chocolate.

For some of these I added some coconut around the base of the domes as well as some whipped vanilla cream, but you really don’t need these extras: simply the base, the dome and possibly the chocolate shard give what I think is a terrific mini dessert. 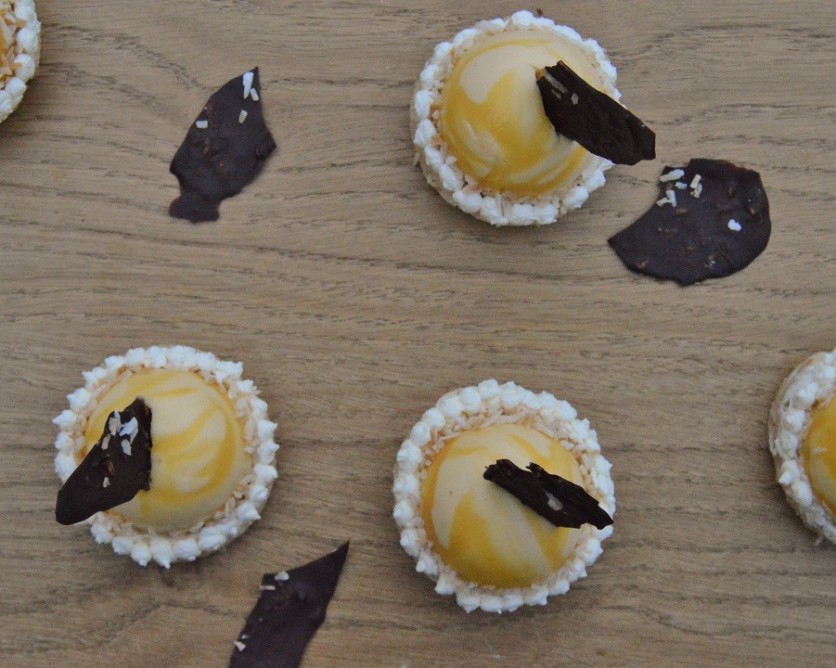 Shortcuts & ways to get ahead

Although they are quick to make, the individual components can to be made ahead, so it is simply matter of popping the domes onto their bases:

Once assembled, which takes moments, you simply leave the tarts in the fridge to allow the domes to defrost: they will hold their shape perfectly, taking on a soft, melt-in-the-mouth texture. The assembled tarts will remain crisp for a couple of days in the fridge.

To get easy domes

Hemi-spherical silicone cake pop moulds, about 4-5cm diameter, are ideal here: you simply fill them with the mixture, put them in the freezer until fully frozen. You then turn them out and place them onto the base, giving a luttle coating of coconut around the bases if preferred.

Bottom half of siliconecake pop mould

If you don’t have this type of mould, you can make them in ice cube trays. Or even spoon the mixture onto greaseproof paper (or quenelle them) and freeze as they are.

(1) Put a small amount of curd into the base of each mould and run your finger around the inside to roughly coat the sides.

(2) Make the filling: whisk the curd, lime juice, coconut cream and melted chocolate together. Squeeze the excess moisture out of the gelatine and add to the hot water, stirring until it has fully dissolved. Stir into the curd mixture and fold in the double cream until incorporated. Whisk in the chocolate until it has been incorporated.

(3) Spoon or pour into the moulds, coming right up to the top. Level off with a palette knife or a ruler. Freeze until firm.

(4) Place a little curd in the base of each mould and roughly spread it around the inside with your finger: don’t cover the inside perfectly as you want to get a random marbling effect when you turn them out.

(5) Make up the bases: mix the ingredients together until well combined and crumbly.

(6) Take about a teaspoonful at a time and place into a small ring, about 5cm diameter. Press firmly into the ring and remove the ring to give a circular base. Repeat until you have made the bases. Chill to allow them to firm up.

NB: alternatively, spoon the mixture onto greaseproof and flatten firmly with your fingers, gently shaping the edge to give a circle. You can keep them fairly rustic or take a little more care to neaten them up.

The photos below show the making of the bases:

base for domes dessert (03)

base for domes dessert (04)

base for domes dessert (05)

base for domes dessert (06)

(7) Assemble: remove the frozen domes from their moulds: they will pop out easily. If you want coconut around the base of the domes dip the flat bases in the coconut, allowing the coconut to come up a few millimetres up the domes.

(8) Pop a little curd onto the base of each dome and place the domes on top: when the domes defrost, they will become very soft and melt-in-the-mouth.

(9) Chill for at least a couple of hours to allow the domes to defrost. If using the chocolate and coconut snaps, lightly press a small piece into the defrosted domes. Pipe a little double cream around the bases if using.

The chocolate and coconut snaps are simply melted chocolate mixed with a little toasted coconut. The proportions above are merely guidelines. You could also add finely grated orange zest or use orange-flavoured chocolate.

This gets spooned onto a sheet of greaseproof and then flattened out thinly using a palette knife, before being left to set. Once set, simply peel away the greaseproof and snap the firm chocolate into shards.